Nothing scary about owning a property regardless of your marital status

It was bank holiday weekend so I decided to spend the holiday with one of my oldest girlfriends Yvonne. It’s been over four months since I last saw her and the weekend therefore provided that unique opportunity to catch-up on latest events in our individual lives.I must confess, we did have a blast! This was not because we had time to gossip (we did a lot of that actually)  but it was actually because I did take home with me pointers on a new personal project I intend to embark on in the coming months (so help me God). While I do not boast of having so many friends,but I have just enough to accompany me on my journey in life acting as a moral compass and stirring me towards becoming a better me.  This is why I cherish moments  like this  because I enjoy their company.

I love my friends because they are a constant source of inspiration and will challenge you to do things you will never deer venture into. For instance, Yvonne just turned 30 and she made up her mind to do something grand the year she hit the  big ’30’ mark. Faced with 2 choices of either getting married or buying a house, she choose to buy a house seeing that the former was not likely to happen within the next couple of months. Initially, I thought she was joking, but she called me 2 months earlier to inform me that she was just handed the keys to her newly built 2-bedroom apartment. All I could do within the weeks that followed was to ‘oooes’ and ‘aahhs’ over pictures of a furniture she has bought for a particular room in the house, or a lovely frame she feels would sit well in one of the bedrooms. On getting there, she was more than happy to whisk me into her tastefully furnished apartment. It was the happiest I have seen her in months and at that very instance, I realised what this feat of owning a property meant to her. We spent the remaining two days talking just about anything and everything starting with the men in our lives,to love,  money and finding the stability we so much desired echoed in our conversations as the days went by. Below are some of the lessons I took away from the weekend and I thought I should share it here especially as theses lessons have kept my chatty mind occupied all week.

Yvonne made sure that I start looking at properties myself which was actually a wake-up call for me to actually think about my priorities in life and how I would want it to pan out in the next couple of years. Whilst keeping an open mind, I was able to see and explore so many opportunities and schemes that I never knew even existed. Ignorance may be bliss but not when it involves me losing out on today’s opportunities.

The best time to invest is now

I had thought that buying a property automatically makes me bound to a particular country which is one thing I don’t want to do at this point. Yvonne however explained to me that rather than seeing it as a long-term project, I could also see it as an investment opportunity and a long-term one at that. I could always rent it up or put it up for sale when it’s not convenient anymore and what better time to invest than now, Today!

So I come from a society that warns that being an independent and upwardly mobile young lady might reduce your marriage prospects. The same was said when I jetted off to Europe to do a masters leaving a relationship behind. At the end, masters worked out fine but not relationship. Morale of the story: Embrace your reality, embrace today, and do not put your life on hold for what is yet to BE!

The weekend reminded me of the dangers of procrastination. I had always known of Yvonne’s plans to get a property of her own for over a year now. While she did encourage me at the time to think about the prospects out there, I, on the other hand, came up with a long list of excuses that made the idea look not only irrational but also impossible to achieve at the time. Fast forward 12 months later, and here I am sitting in a tastefully furnished apartment with a great view of a lake and park. Moral of my point: stop making excuses for why you CAN’T but instead make a list of why and how you CAN! 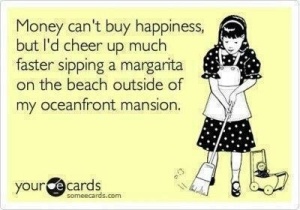 back was obviously because of my finances. I had only gotten this job and I thought I needed to clear all my credit card bills incurred in the period of working as an intern. If there is anything I have learnt about money is that it is spent faster than it is made (this is if you are on a salary scale like me). Therefore, I have developed a rather disciplined approach to my finances which means no more going on a shopping spree because I am bored or going for a vacation because I can afford it. While I will still indulge in such (as they are my guilty pleasures), I can plan how and when it happens. This will enable me save up for a bigger expenditure when that time comes.

Back to my friend Yvonne, she is still keeping tab of the progress I have made so far.

Knowing the kind of girl tat she is ( a go-getter who never takes ‘No’ for an answer) I am more than certain that she will keep cheering me on until the dream becomes reality. Now don’t we all need a cheerleader every now and then? I certainly do!