Home › Lifestyle › What wakes you up, alarm or passion?

What wakes you up, alarm or passion? 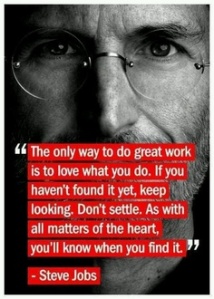 In a recent discussion with someone I consider my mentor (even though he is oblivious of this),  he asked me a question that I have been pondering over for days now. He asked, “What wakes you up, alarm or passion?” He said a friend asked him the same question earlier. To his question I replied passion because I am passionate about what I do.

Also, I am sure my alarm, by now, has given up waking me up as my body doesn’t seem to give in easily to its buzz. As such, I tend to get out of bed only when I can psyche my body to because I tend to be unperturbed when my alarm goes off at 6:30 in the morning. I am prone to quickly getting hold of the alarm and turning it off as fast as can in my semi-sleepy state before going for another round of sleep.  It could also be because I am not a morning person. So I thought to share my thoughts on this matter of passion and alarm.

I am half way into Sheryl Sandberg’s book titled, ‘Lean In’ and aside from the fact that I have totally enjoyed every chapter so far, something struck a chord in me while reading one of the chapters titled ‘Seek and Speak your Truth’ . In this chapter, Sheryl talked about being truthful to oneself  and standing up for that truth in the workplace because emotions does drive our productivity and success.  She says, ‘motivations come from working on the things we care about. It also comes from working with people we care about’.  This is so true for me. Looking back over my life’s choices, especially in terms of work and career path,  I have always being that girl who gets her head buried in work because I care about it enough to the extent that I get lost in time and would rather not be anywhere else. That for me is my motivation, as I do not see it as work but an interest/passion of mine.

For instance, I remember my undergraduate days at the University of Lagos. I was studying for a degree in Mass Communication and was majoring in PRAD (Public Relations and Advertisement). But for some reason that I could not explain until now, my days and nights were spent inside the wooden shack that was my department’s library turned Press Room at the time. I still remember how journalism student pulled resources together to furnish the Press Room with basic IT equipment like Desktop computers and printers. Most of the best memories of my undergraduate days were spent in this wooden shack that became my second home. Reminiscing about this period in time brings a big smile to my face even till today. At the time, I didn’t understand why I bothered so much, and even though I was not a journalism major, I lived and breathed journalism. Today, I know better and I can only attribute my actions then to motivation because I actually cared about writing and I cared about the people I shared the Press Room with as well.

While I have had my little stint in banking, I was only motivated to go to work daily at the time because I was saving up for my post-graduate degrees and a banking job offered me this opportunity at the time. But here I am seven years later and I have some what found my way back to writing, which I totally enjoy doing.  While my writing mostly consists for research and policy papers, I have also found solace in going home to writing for my pleasure as well.  So the question remains, how do we ensure that we work on things we care about? How do we stay motivated even when it means sacrificing the known for the unknown?

I know life can sometimes throw us curve balls and disturb our well cut out plan to the extent that we wake up one day only to realise that we are so far of from our target – I have had such mornings while I was in between jobs. I remember how  those months were filled with depression, self-loathing and anger until I made that decision to quit that which was making me sad and ‘just Do It’ like Nike.

It turned out to be a good plan even though I still had to face long months of little or no income. But during this time, I was able to really decide the career part I wanted to take. Then I came up with a list of the elements that the job must include. This core elements are what motivates me to get up each morning. It’s also what motivates me to work late into the evening even though I won’t be getting paid for over-time. I have, on countless occasions sneaked into work or check my emails while on my annual leave because I know  so much could have happened in my absence. I also care about the people I get to work with who go far and beyond their primary duties to get the job done. Hence, they have become my second family just like the journalism majors in my university.

My rationale for this is somewhat grounded in the fact that I see my work as an extension of who I am. I also  happen to care a great deal about issues of injustice, advocating for the rights of  women, children and migrant families and basically given voice to some of the harsh treatments faced by vulnerable people in the society. This is my passion, this is what motivates me and I feel rather fortunate to do this for a living. This passion of mine has daily provided me with just enough motivation to keep on going even when I get frustrated with the bureaucracies and policies one has to navigate in the system to get justice or benefit. I also get frustrated from time to time because of things I have no control over and lose the will to go on. But then, I look at the progress  made so far and at that point, I realise that I have come to far to call it quits.

What  wakes you up, alarm or passion?

Please know that there is no right or wrong answer.

Thanks for reading and  I would love to hear from you!