Home › Advocacy › Why we wear the Red Ribbon

Why we wear the Red Ribbon 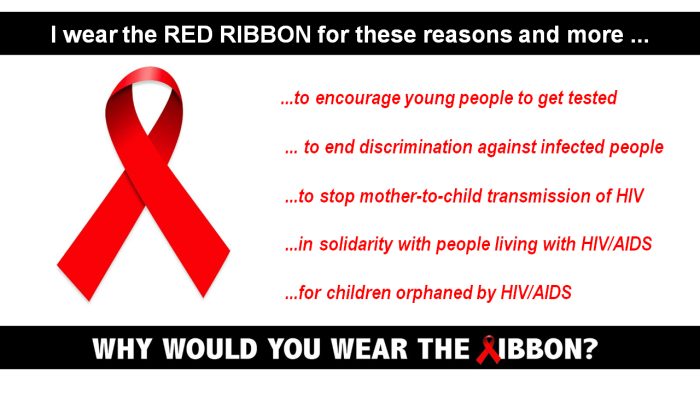 I first saw the movie Philadelphia starring Tom Hanks (as Andrew Becket) and Denzel Washington (as Joe Miller, his solicitor) in secondary school. Tom Hanks played a very successful lawyer whose employment was wrongfully terminated when his employers discovered that he had AIDS. As a result, he enlisted the service of Joe Miller, a homophobic lawyer, to advocate for his wrongful termination. This 1993 American drama film has been acknowledged by many as one of the first mainstream films to acknowledge HIV/AIDS as well as the stigmatisation and discrimination associated with the disease.  Young me, at the time, rather than being caught in the global health message conveyed by the movie, seemed to be more caught up in the discrimination and dismissal that trailed Andrew’s illness (which I didn’t quite understand at the time). I thought that the least his employers could have done was to pity this very ill and lean man fighting for dear life.

During my final year as an undergraduate student of Mass Communication, final year students were expected to take a Communication for Development course thought by the head of the department himself. The class was split into ten groups, each representing a theme around different global issues. Each group was tasked to come up with an advocacy campaign based on the global issue assigned to them. My group got the  HIV/AIDS campaign. We were told to create an HIV/AIDS awareness campaign that would resonate among students on the university campus. The task at hand, though simple at the time, was unfamiliar to us even though the average age was 21. After a lot of research, we came up with an advocacy campaign that was themed ‘It could be you!’ We came up with three key messages. The first was: “It could be you! Stop the discrimination and stigmatisation of people living with HIV and AIDS”.  The second was:“Know the ABCD of HIV prevention – (A) abstinence, (B) being faithful, (C) correct and consistent use of condoms and (D) early detection. The third message was: “Know your HIV Status”. These three messages were incorporated into our campaign fliers, posters, souvenirs and a radio jingle. This would be my first taste of a campaign project.

As we celebrate World AIDS Day today, I not only reminisce about the past but also try to reflect and evaluate on what progress has been achieved to eliminate HIV infections and the stigmatisation of people living with the virus in our society.  While over 34 million people have died from HIV/AIDS since it was first discovered in 1981, there are still more that 37 million people living with HIV worldwide. Despite this heart-wrenching statistics, one should not forget the advancement that has been made in the field of science and technology to tackle this epidemic.

Yes, a lot still needs to be done especially in countries like South Africa, Nigeria, Kenya, India, Mozambique and Tanzania that account for half of adolescents (15 –19 year olds) living with HIV in the world. These countries also have the highest burden of people living with HIV globally.  A UNICEF statistical data released last week in South Africa found that the number of adolescent deaths has tripled over the last 15 years. AIDS is a leading cause of death among adolescents in Africa  for two main reasons. The first being that most children have survived to adolescence oblivious to the fact that they are HIV-positive. Secondly, only 1 in 3 of the 2.6 million children under the age of 15 living with HIV has access to treatment. 26 new infections occur every hour and 7 in 10 new infected adolescents are girls.

In light of these facts, it is time we got more young people to lead the conversations among their peers on the importance of knowing one’s HIV status and practising safe sex, through abstinence or the use of condom. We need to continue to let people who inject drugs know  how deadly it can be to share needles whilst scaling up harm reduction measures for this group.  We need to campaign against HIV-specific and anti-LGBT  laws that often act as barriers to people disclosing their sexual orientation and consequently discouraging high-risk people from getting tested, knowing their HIV status and receiving antiretroviral treatment.

Finally, we need to encourage women, especially those living in rural areas, to get tested and know their HIV status. This will help prevent mother-to-child transmission of HIV. We need to frame or change HIV and AIDS narratives, debates and conversations to one that shows empathy, rather than sympathy. Most importantly, we need to stop the discrimination against people living with HIV/AIDS and this starts with you and me.

So to commemorate this year’s World AIDS DAY, my  friends and I are wearing the RED RIBBON for the following reasons:

…to raise awareness of HIV/AIDS

…in remembrance of people we have lost to AIDS-related illnesses

…for children orphaned by HIV/AIDS

… to end discrimination and stigmatisation against infected people

…to encourage young people to get tested

…in solidarity with people living with HIV/AIDS

…towards a concerted effort in finding a cure

…to stop mother-to-child transmission of HIV

…to keep young girls in school

I hope you wear the Red Ribbon too for one of these reasons or maybe for a reason not on the list. Please share your reasons below if you can.