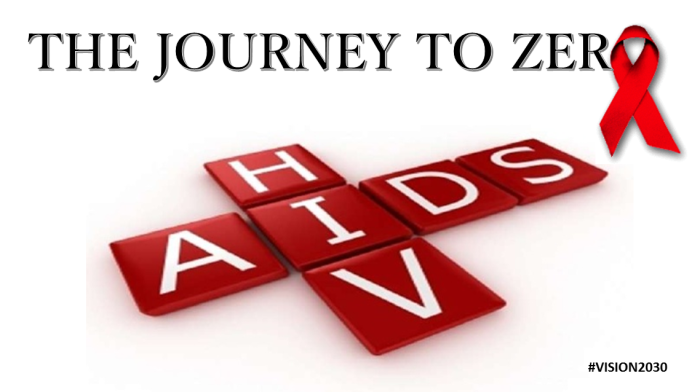 Nigeria joined the rest of the world to commemorate World AIDS Day on December 1 with the theme: ‘Getting to Zero: Zero new HIV Infections, Zero Discrimination, Zero AIDS-Related Deaths’ by the year 2030. There is also a 2020 target to eliminate mother-to-child transmission (MTCT) of the virus. This comes in the wake of the uncertain future that awaits the HIV/AIDS funding climate as international donors and partners begin to pull away from Nigeria.

So how will Nigeria achieve this 2030 target? The magical number is zero. How do we move from having about 3 million people infected with HIV to barely having none? Since we have achieved the same feat in eradicating polio, I am optimistic that HIV/AIDS can be eradicated as well. However, in order to see real or lasting results and changes, the journey that lies ahead of us all (government, NGOs, donors, civil societies, advocates, persons living with HIV and the entire population) isn’t one that can be undertaken without sustained efforts in adopting successful strategies for planning, implementing, monitoring and evaluating progress made backed by the required funding. In addition, removing barriers to HIV status testing such as gender inequality, discrimination and stigmatisation of people living with HIV, inaccessible treatment and the general lack of data to know how many Nigerians are HIV- positive will go a long way in eliminating this epidemic. With just 15 years to get to point zero, here are six strategies to help achieve the set target.

Engage young people: According to a UNICEF statistical data released last week in South Africa, the number of adolescents (i.e. 15 to 19 year olds) deaths has tripled over the last 15 years. AIDS is a leading cause of death among adolescents in Africa  for two main reasons. The first being that most children have survived to adolescence oblivious to the fact that they are HIV-positive. Secondly, only 1 in 3 of the 2.6 million children under the age of 15 living with HIV has access to treatment. About half of adolescents living with HIV are in six developing countries – South Africa, Nigeria, Kenya, India, Mozambique and Tanzania. 26 new infections  occur every hour and 7 in 10 new infected adolescents are girls. In light of these, it is high time we began to include young people in the conversation, and if possible, equip them with the right stools and and provide platforms where they can lead these conversations around HIV prevention, testing, counselling and treatment. Such opportunities will enable young people to engage in conversations amongst their peers on having a healthy lifestyle, knowing their HIV status and making right choices when it comes to practising safe sex. Also, parents should be more open with their children when it comes to sex education. Rather than leaving sex education to biology teachers, parents ought to create the atmosphere where children and young people are not afraid to ask questions. Let’s face it, if we do not educate children and young people early enough on this issue, they are likely to get educated on the internet or by their peers who may know little or nothing about the importance of practising abstinence or safe sex. In the words of Craig McClure, Head of UNICEF’s global HIV/AIDS programme, “it is critical that young people who are living with HIV/AIDS have access to treatment, care and support… and those who are HIV-negative must have access to the knowledge and means to help them stay that way”.

Change narratives: The advances made in the field of science and technology have reduced the astronomical number of deaths linked to HIV/AIDS-related illnesses. Hence, the world is gradually becoming a better place for people living with the infection. Therefore, even when one tests positive to HIV, it is not a death sentence as some people are quick to believe. Instead, we now live in an era where dreams and hopes are no longer dashed as persons living with HIV continue to live normal lives, stay in healthy relationships, have families and also give birth to healthy children who do not carry the virus. That being said, I believe the media have the important duty of framing positive narratives, conversations, debates and news about HIV/AIDS to that which is positive, empowering and liberating for the public. Our narratives should be such that helps changes mindset and stereotypes that currently exist in the country. No longer should conversations around HIV/AIDS be one of shaming or blaming, but rather one that encourages every Nigerian to know their HIV status and also support persons who live with the virus.

Accessible  treatment centres: Although the first two HIV/AIDS cases in Nigeria were identified in 1985, the initial response to the epidemic was quite slow as the Nigerian Federal Ministry of Health only attempted to assess the situation in 1991 – six years after it was initially identified. Antiretroviral (ARV) therapy and drugs were introduced in Nigeria in the early 1990s. At present, 14% of the global deaths from HIV/AIDS related illnesses are in Nigeria. While there are 820 treatment centres in the country, only 21% of people living with HIV are receiving ARV drugs in the country. High cost or the lack of free ARV, recurrent ARV shortages at treatment centres, weak referrals between communities and centres offering ARV services as well as the lack of human resources and technical skills all contribute to this abysmal figure of people accessing treatment in the country. In order to get to point zero HIV/AIDS target by 2030, the government needs to do more to ensure that these mitigating  factors are dealt. This is because making ARV treatment accessible to all persons living with HIV in Nigeria is the first step, not only towards reducing deaths, but also reducing the chances of onward transmission to others consequently containing the epidemic.

Close the gender gap, protect the unborn child: It has been reported that women constitute 58% of the people living with HIV. A lot of women often shy away from informing their sex partners or husbands as they are afraid of being labelled promiscuous. This often leads married women to be thrown out of their matrimonial homes when they eventually tell their spouses. If not, they end up transmitting the virus to their unborn child. The National Agency for the Control of AIDS (NACA) reports that many of the new HIV infections in the country are due to mother-to-child transmission which accounts for about 27.3 percent and only 27% of pregnant women in Nigeria currently receive treatment to prevent transmitting the virus to their unborn child(ren). Therefore, there ought to be more campaigns targeted at women so they can get tested, get support, counselling and access prevention of mother-to-child transmission of HIV (PMTCT) services at hospitals during and after pregnancy. Particular consideration should equally be given to women in rural areas by making testing, counselling and PMTCT services available to them as well.

Funding commitment and political will: Since 2002, Nigeria has enjoyed funding and technical assistance to combat HIV/AIDS epidemic from some of the world’s biggest donors like the U.S. President’s Emergency Fund for AIDS Relief (PEPFAR) and the Global Fund for AIDS, Tuberculosis and Malaria, just to name a few. Consequently, should donors choose to bid us farewell at this point in time, we should not be perturbed by this latest funding development. Rather, the government should rise up to the task. Yes I understand, it might be challenging at first, but then again, I believe we have the opportunity to prove to the international community that we are a nation that is resilient and capable of eliminating the disease with or without donor support. South Africa presently fund its own HIV response while Kenya, Togo and Rwanda have also doubled their HIV spendings in the past few years. Nigeria should take a cue from these countries and step-up to the challenge as donor funding begins to dry up. There has never been a greater time than now for the government, in partnership with the private sector, to make strong funding commitments towards the nation’s HIV response programmes. This concern has also been echoed by advocates that there needs to be strong government commitment to HIV response in the country in the form of funding and resources needed to mobilise the population to know their HIV status and expand access to ARV treatment for every Nigerian. Government taking ownership of HIV response in the country coupled with a comprehensive and an informed strategic policy will go a long way if Nigeria is to achieve it’s HIV/AIDS zero target by 2030.